Popeyes and the Power of Viral, Black Marketing

How a Chicken Sandwich Became an Overnight Sensation

Popeyes and the Power of Viral, Black Marketing

[RETHINK Retail] — Move over Chick-Fil-A: There’s a new sensation on the fast-food chicken sandwich scene and her name is Popeyes. The 2019 Chicken Sandwich Wars dominated social media last month with brands beefing on Twitter and consumers chiming in with viral memes culminating in the lesson in the power of virality and internet trends to affect markets.

It all started with an otherwise innocuous tweet by the Popeye’s Twitter account announcing the release of its brand-new chicken sandwich and promptly spiraled into a social media showdown. This brand of social media isn’t particularly new, popularized by fast food chains Wendy’s and Denny’s brand of quintessentially Millennial-Gen Z angst. Now, the vigor with which actual people have participated in this undeniably promotional debate notably has renewed the debate for letting actual fans do your advertising for you. 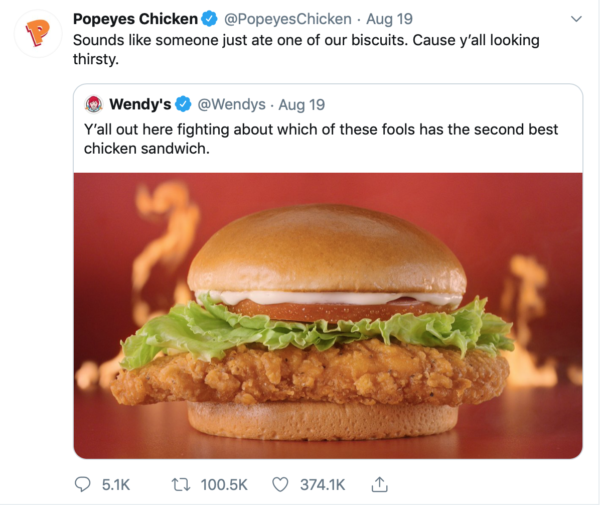 According to Apex Marketing, the social media explosion generated approximately $23.25 million in equivalent ad revenue across the digital, print, radio and television media space: free advertising based on the word-of-mouth power of Black Twitter. In less than a week, these numbers more than doubled after Apex Marketing updated its estimates reaching a total of $65 million in ad value. Of course, nothing is truly free. This is the power of earned marketing. Some people confuse this figure of equivalent advertising to “free advertising; however, that fails on more than a few fronts.

First, it doesn’t reflect impressions based on the target demographic and it does not consider the consumer sentiment about the product. Additionally, it doesn’t necessarily translate into direct sales for the company: the greater conversation to be had about this is the way Popeyes leveraged its earned marketing plan into profits that did the impossible.

The company’s social media following exploded as well, allowing for them to organically reach larger audiences. According to estimates, the company gained approximately 60 percent of its overall following over the course of the two-week media fiasco. Popeyes gained more follower in a single week than they’ve managed to garner over the course of two years. The great chicken sandwich war has reduced the net gap between these two; however, social media patronage is nothing more than a vanity metric, so how do we quantify actual success? Simple, we can address its success by way of total sales.

While there’s a case to be made about the broad reach of their marketing plan and how they leveraged earned media to push their message, the true message here is how harnessing the surreptitious influence of Black Twitter can lead to immediate success. However, it’s easier said than done. The power of virality is born through authenticity. It’s something, to put it simply, you just can’t buy. When you have the attention of a dispassionate audience there’s no real way to leverage it. In that instance, the consumer holds the power.

Other companies may try to imitate the success of Popeyes, but you can’t catch lightning in a bottle twice. And with a young, massively online audience who is more likely to spite media spin, I pity the poor fool who tries to pull one over on the savvy and savage social media generation.