[RETHINK Retail] — In an episode of the 1960s cartoon “The Jetsons,” it makes absolute sense to shop for a new spacesuit. Although Elroy and Judy Jetson could hang out with their grandmother in Chicago, space life with George and Jane was their home away from home. And they dressed for the occasion.

In 2019, we could be doing the same thing. Science and technology have already come surprisingly close and sometimes outsmarted the fictional cartoon series. From artificial intelligence appliances to industrial clothes-making machines and digital journalism, we’re a lot more like the cartoon series than we could’ve imagined.

More than 500 people have traveled to space since legendary astronauts Neil Armstrong, Edwin “Buzz” Aldrin and Michael Collins went to the moon in 1969, and the attire continues to evolve. And on Wed., Oct. 16, Under Armour unveiled space gear for Virgin Galactic’s private astronauts that’s as fashionable as it is practical. 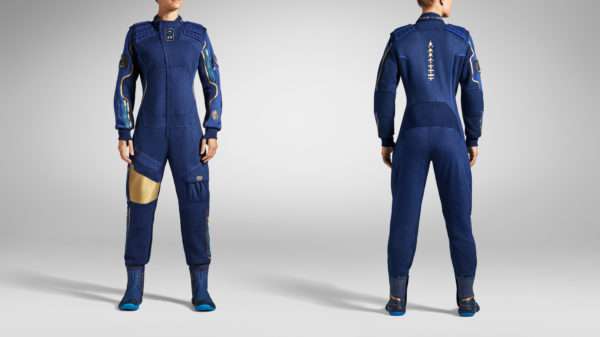 The UA|VG Space Suit | Photos courtesy of Under Armour

On Oct. 28, 2019, Virgin Galactic became the first commercial spaceflight company to be publicly traded on the New York Stock Exchange. In 2020, Virgin Galactic’s SpaceShipTwo (also called VSS Unity) will be used as the first commercial spacecraft. Italian Air Force, a government agency, is sending up to six people and two pilots into space next year to monitor their shift from Earth gravity to microgravity. Chemicals used for environmentally friendly fuel will also be monitored.

This will not be the first time that Virgin Galactic flying equipment will go to space. It has previously gone a handful of times with only pilots. And in February 2019, Virgin Galactic’s chief astronaut instructor Beth Moses — and the first woman to fly aboard a privately funded spaceship — came along.

In the 2020 trip, the spaceship will be dropped from a jet-powered aircraft at approximately 40,000 feet before the rocket motor will be fired, reports Space.com. If all goes right, the spacecraft and its passengers should be able to float for approximately 10 minutes before coming back down to Earth.

And more than 600 space travelers worldwide put down a deposit of $250,000 per person to be next in line. (All currently released seats have been sold, and there is now a waiting list.) A few famous names on the space travel list include prankster/actor Ashton Kutcher, pop singer Justin Bieber, comedian/actor Russell Brand, singer Katy Perry and actor Tom Hanks.

How Under Armour got involved in space travel

With such a small group of people going in 2020, this kind of trip could’ve been too rare to need to sell space equipment. But if Virgin Galactic is successful, then the traveling number could be more like 16 flights a year in 2020, then up to 270 flights a year by 2023 once its entire fleet of five vessels is ready. Business Insider reports that space travel business could average out to one flight every 32 hours.

This is not only financially lucrative for space travel but also for athletic attire companies, too.

“At Under Armour, we pride ourselves on always getting better and leaning into innovation to drive progress for our athletes, but few things can prepare you for a project as challenging and exciting as this one,” said Kevin Plank, founder and recently-departed CEO of Under Armour, in a recent press release.

“Spaceflight is a unique and demanding regime and requires a different approach. What we’ve engineered utilizing our key technologies will define the future of spacewear and puts us at the forefront of this history-making event. We are grateful to Richard and the incredible team at Virgin Galactic for trusting us with this groundbreaking challenge.”

In the Under Armor Virgin Galactic design, the Base Layer is like an extra layer of skin on the human body to enhance performance and blood flow during the highest and lowest parts of the flight. UA’s Intelliknit fabric is made to regulate temperature and manage sweat, without any material waste. Before takeoff, space travelers can also add a loved one’s photo on the heart area of the inner side of the jacket.

Of course, all good things must come to an end. In the case of UA fashion though, travelers can have an everyday memory once they land. A personalized patch for each space travel mission will also be included in the suits. The patch can be removed and attached to each Future Astronaut customer’s flight jacket to wear while they’re back on Earth.