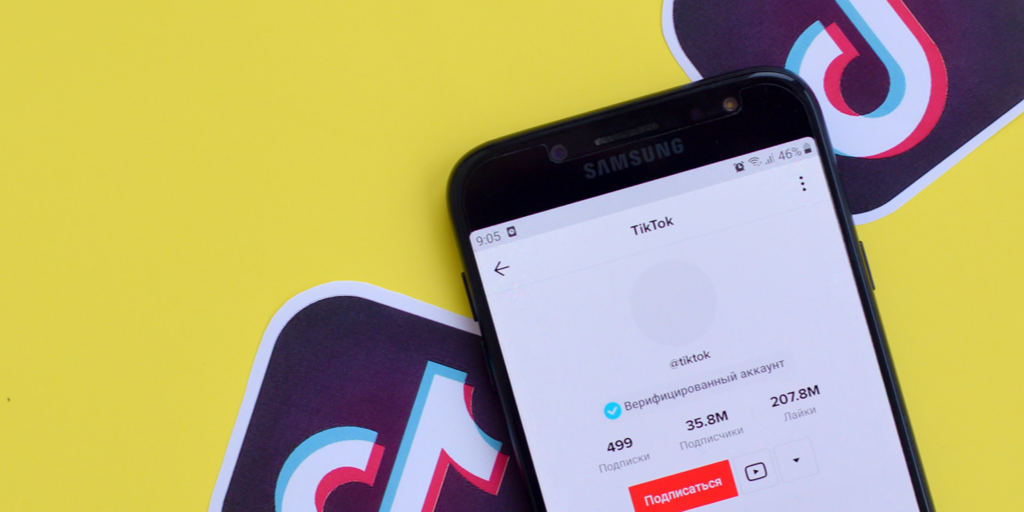 TikTok is one of those mobile apps that can make a smartphone user wonder, “Wasn’t the sun up when I opened this app?”

Amazingly addictive and originally geared toward music lovers, retailers are finally understanding the appeal of promoting their businesses on the app.

Promotional videos are nothing new. But what TikTok does is get to the point faster, much faster. If retailers use this app correctly, their marketing and sales teams will have to work hard to try to avoid users swiping up to go on to the next video.

What retailers are doing to gain TikTok audiences

So, what are users in for by downloading the TikTok app? It turns out retailers are pretty creative at making consumers want to buy things they probably weren’t thinking much about before the video auto-played.

Hum along to the “Pink Panther” theme song while Starbucks creates the Pink Drink. Or, watch the caramel get vacuumed off of the Caramel Ribbon Crunch.

Dance in the Walmart aisles with the twerking llama toy. Find your favorite deal at Walmart and record your version of the #SavingsShuffle. But whatever you do, don’t participate in the #PlantParents emergency in the gardening aisle—even if you’re still crying over that last drooping plant in your living room.

Admit that the Samsung chant is memorable, even if the dancing leaves much to be desired: “Awesome screen. Awesome camera. Long-lasting battery life.”

Snoop on “The Savages” modeling Savage x Fenty lingerie, and see which items (literally) climb their way out of the #UXTRA box.

Wipe away tears in the NBA video of the boy who got a Saquon Barkley jersey for Christmas. Then be moved by the way the number 24 Dallas Mavericks jersey was retired, as a tribute to the late NBA legend Kobe Bryant.

And when you’re done with all that, know that there is more to watch.

With all the work that retail marketers put into creating the “perfect” video ad, 65 percent of people skip right by it, according to IPG Mediabrands’ Media Lab (via CNBC). And millennials are definitely a high percentage of skippers, reports UBS Evidence Lab (via eMarketer). It turns out 59 percent of millennials only watch YouTube video ads until the skip option pops up on the screen. This leaves only 29 percent who watch ads to completion.

Of course, there are tricks to get around the videos that do not have the skip option (until YouTube disables those hacks, too), but the bigger point that retailers need to understand is why people skip their ads.

For a large number of video users (76 percent), skipping is just an ingrained habit. So, if retailers can’t intrigue viewers within the first 5.5 seconds of a 15-second ad or 7.4 seconds for a 30-second ad, this video will almost certainly be ignored. But TikTok videos are usually 15 seconds (unless several videos are connected for a maximum of 60 seconds). So, if a retailer can keep their followers on the page long enough to intrigue them for a full minute, that’s a win.

How retailers are intriguing a TikTok audience

Social media enthusiasts have seen this kind of video excitement before. Now-defunct Vine had six-second time limits. Snapchat has 10-second time limits. Instagram displays 15-second videos. Now Vine’s co-founder Dom Hofmann has started the new short-form video app, Byte. At some point, retailers feel like they’re chasing their own marketing tails trying to keep up with all the video software to advertise their products. But what makes TikTok stand out from these other platforms? And why are well-known brands like Burberry, Chipotle, HP, NBA, NFL, Nike, Samsung and Walmart testing it out?

With more than 1 billion users, there’s no way to deny that this app is incredibly popular. And seeing videos is obviously a way for advertisers to lure potential customers in. But with customers’ growing lack of interest in the kind of long commercials that were the norm before, it’s up to retailers to make consumers stay engaged. According to CNBC, 43 percent of people who watched an ad with “high emotion” were more engaged versus 32 percent who saw “low emotion” commercials.

Product placement (i.e. having the brand name near the skip button) and showing the company name early on are two other techniques to make an impression immediately. Although the drinks changed, Starbucks made sure those recognizable cups were clearly visible in their TikTok videos. Employees dancing in the aisles of Walmart always wore their work vests. And even in a Savage x Fenty video where nothing more was happening than a tattooed hand signing a name, the “Navy” immediately recognized the famous pop star’s hand before the signature “Rihanna” was even visible.

What’s next with TikTok and retailers?

Although the Beijing-based company was founded in 2012 by Zhang Yiming, it’s still fairly new to users in the United States. It wasn’t until 2017 that the app was opened up to iOS and Android users. The great thing about this global platform is that it gives retailer’s the opportunity to get more eyes on their page. The downside is it may not be as profitable for small companies that don’t have a wider reach. Still, for smaller companies that have the potential for growth, this is their time to shine on an even-level playing field.

Although new users can pick categories they are interested in (food, drink, music, art, etc.), videos aren’t suggested to them based on which accounts are the most popular, which companies are the most well-known or by dissecting the background of each user. Signing up doesn’t require rigid questions regarding race, gender, location, age, etc. With just an email address, users are instantly logged in to watch free videos. And they have the power to pick and choose what they want to see without the popularity contest common on other social media platforms.

The app leans more toward what’s trending (i.e. a song, a dance routine, a holiday). Users can stop to play what initially comes up or scroll upward to get to the next video. Of course, it’s always nice when users like or comment on something, but for retailers, the bigger picture is getting followers to want to watch their short clips in full and then see more of them from this same retailer. This means that the user has to have a reason to search for the retailer in the first place, and there have to be enough interesting short videos to make them want to keep watching. With 15 seconds to do it, retailers should learn how much every second counts.

One Year Down the Line, the Grocery Sector Proves Resilient to Pandemic Woes