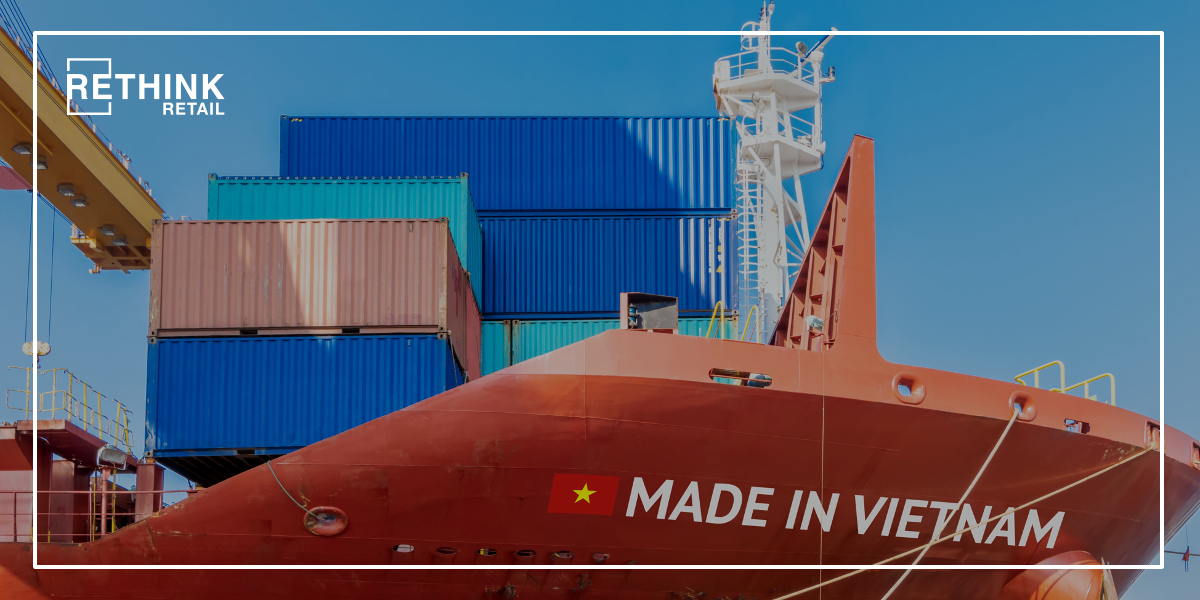 Vietnam is currently experiencing a slow reopening after a devastating hit by COVID-19’s delta variant this summer. Four months of increased restrictions and shutdowns have slowed supply chain operations and taken a hit to the country’s health, economy, and business partners.

As COVID cases overwhelmed the population, canceled orders and delays became a norm for US retailers with suppliers in Vietnam.

American apparel and footwear retailers have long relied on the country’s manufacturing infrastructure and labor force, but changes will need to be made so that supply chain demands are met.

Why is Vietnam a suitable supplier for American businesses?

Vietnam is one of the largest exporters to the US, and it goes further than footwear and apparel. American consumers expect furniture, electric machinery, semiconductors, and rubber products from Vietnamese manufacturers and that could change if restrictions continue into the late fall and winter.

What makes Vietnam such a reliable supplier? Tom Gould, vice president of global customs at Flexport had this to say: “”Vietnam has been able to say to their customers, ‘You want a product; I’ll deliver you the product,’ as opposed to, ‘You want a product; tell me how to build it, and I’ll make it for you.”

The country also maintains highly competitive labor costs, a relatively stable governing structure, generous tax incentives for US businesses, and even cultural familiarity for companies accustomed to operating out of China.

Outside China, these advantages meant that Vietnam towered over other Asian countries when it came to encouraging business with American businesses. Vietnam formalized relations with the US just about 25 years ago, but bilateral trade agreements have risen sharply from $450 million in 1994 to $77 billion in 2019.

Further, a longtime trade dispute between the US and China put Vietnam on the map as an alternative supplier. Even when COVID-19 cases rose sharply last March and April, “Vietnam offered the most cost-competitive China alternative for general manufacturing in Asia,” said Dustin Daugherty, Head of North American Desk for Dezan Shira & Associates.

Until this summer, Vietnam garnered praise for its effective response to the pandemic. The country kept its case numbers low by closing its borders to foreigners and imposing social isolation measures by April 1st of 2020. Prospects for recovery remained more positive than other Asian countries and that meant US companies could continue doing business as usual.

Until May 2021, less than 3,000 COVID-related deaths had been reported in Vietnam—that number grew to over 21,000 during this summer and no one saw it coming. At first, restrictions were only meant to be in place for two weeks, but as cases toppled 800,000 this summer, factories shut down by the dozen.

Shipments were also delayed and the available workforce at Vietnam’s ports dropped by 50% by the time the lockdowns were lifted on october 1st. “Unlike the other ports in [the] US and some ports in China, the Vietnam dwell times and congestion were mainly related to COVID-19 lock downs,” noted Hariesh Manaadiar, director of market and data intelligence at Project44.

As restrictions continued and factories shut down at the height of the delta variant, exports from Vietnam to the US and other Western countries dropped as well. Additionally, a delay between manufacturing and shipping meant the steepest decline in exports didn’t come until September—90 days after the lockdowns started.

From September on, delays are expected to continue well into 2022 as goods that were supposed to be manufactured in June, July, and August make headway much later in the year.

All of this is bad timing for American retailers, who are trying to ramp up supply for the holiday season. Back in August, executives of 90 companies including Fruit of the Loom and Nike requested the Biden administration boost vaccine donations to the country in an effort to regain the health of Vietnam’s manufacturing industry.

Earlier this month, one garment factory in Binh Duong Province was down to 80 employees—a fraction of the 350 they held earlier this year. Jason Chen, the chairman and founder of this factory said that the factory’s remaining workers were living on the premises to comply with government restrictions.

“This year in the U.S.A., everybody wants to go shopping. Some goods cannot be delivered in the right time. So it really will affect the holiday,” Chen furthered.

As reopenings for Vietnamese factories continue to be pushed back, concerns are ballooning for American companies. At the moment, retailers will need to consider whether there’s enough time between now and the holidays to find partners in other countries and meet shipment demands.

Examples include Urban Outfitters—who stated they will have a hard time replenishing best-selling products during the holiday season, Adidas—who’s supply chain delays cost them more than $500 million in Q3 and Q4, and Restoration Hardware—who has delayed the release of their new collection to next spring.

Supply chain developments looked bright earlier this summer, so recalibrating this late in the year is not a step retailers have looked forward to taking in light of Vietnam’s COVID-crisis. Some companies have started communicating these concerns with their audience. L.L. Bean recently included a banner on their website urging customers to make holiday purchases earlier in an attempt to avoid supply chain ​​delays and shortages.

Michael Preysman, chief executive of the apparel company Everlane argues that the supply chain won’t return to pre-pandemic health for a few years. Some of Everlane’s factories reached 100% lockdown during the summer, which required the company to make serious decisions regarding their future suppliers.

Vietnam’s reopening strategy is looking up

Factories are starting to reopen as of early October, but it’ll be a while before we see 100% capacity again. In Ho Chi Minh, where nearly half of all Vietnam’s COVID-19 cases were accounted for, shutdowns took a significant toll on workers and thousands left the city. This has led to a labor shortage that will likely not be resolved until Q1 of 2022.

John Kernan, the author of the Cowen Report stated “Orders are now 8 weeks plus delayed according to our contacts… vendors are canceling orders the retailers are making.” For some, eight weeks of delays will make the difference between staying put and finding a new supplier before the holiday season starts.

And it’s not just production delays. Ocean freight costs have soared and labor shortages on US ports have led to hundreds of cargo ships swimming in circles off the coast of California. Some retailers have gone as far as chartering their own airplanes to transport goods, but most will agree that’s not sustainable for the long term.

However, we’ve got to be optimistic about Vietnam’s prospects. The country continues to be an attractive locale for long-term investors as major tech giants like Apple, Intel, and Qualcomm have already moved production lines to the country due to trade war costs.

Production is also starting to ramp up. Saigon Hi-Tech Park, which accounts for about a third of Ho Chi Minh’s exports, has risen to 60%-70% capacity this month from 30%-50% last month and that percentage is expected to keep rising.

We may not see the same levels of supply chain stability from 2019 in 2022, but data from the World Bank suggests the country’s economy will improve by around 6%, near pre-pandemic levels—and that’s a strong indicator for retailers.

Nevertheless, American consumers should expect significant supply chain delays from some of their favorite retailers this winter and that could change holiday shopping prospects. Online shopping isn’t going anywhere, but making purchases locally, in-person and early in the holiday season is the easiest way to avoid delays.